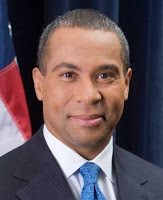 Yesterday Massachusetts Gov. Deval Patrick “quietly” signed an executive order protecting state workers from discrimination on the basis of gender identity. Christian groups have denounced the protection as “the bathroom bill” and are screaming the usual nonsense about men in dresses stalking little girls in public restrooms.

“This Executive Order ensures that all employees in the executive branch will continue to be able to perform their duties free of discrimination,” Patrick spokesman Alex Goldstein said in a statement. Gay rights groups hailed the move yesterday as a strong “first step” in equality for transgendered people, but critics have cautioned that the bill could make state restrooms and lockers unisex. “If this indeed is a bathroom bill, if it is there’s no doubt that it will impact the public schools,” said Kris Mineau, a longtime opponent of the bill. Arline Isaacson, co-chairwoman of the Massachusetts Gay and Lesbian Political Caucus, said she’ll still work to get the legislation passed in order to ensure equal rights in the private sector. “We are deeply grateful yet again to Gov. Patrick for his solid and consistent support,” Isaacson said.