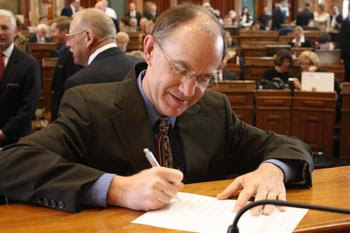 Folks, this one takes the cake.

It would be legal for an Iowa business owner who cites religious beliefs to refuse to provide jobs, housing, goods or services to people involved in a marriage that violates his or her religious convictions, according to a bill an Iowa House subcommittee will consider on Wednesday. House Study Bill 50, called the Religious Conscience Protection Act, would allow a person, business or organization such as a charity or fraternal group to deny services without fear of facing a civil claim or lawsuit if they think doing so would validate or recognize same-sex relationships. The same-sex exclusion is by itself constitutionally troubling, several legal scholars and civil rights activists said. However, the bill is so broad that it would legalize a wide spectrum of other discriminatory acts, they said. They raised questions about whether services could be denied if, say, a Christian were married to a Jew or if a woman who is 60 married a man who is half her age and the couple could not procreate.

Iowa’s GOP House Speaker says the bill “has a shot” of passing. Our hero in the state Senate, Mike Gronstal, will likely block the bill from consideration there.