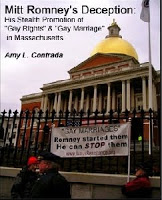 The SPLC-certified hate group MassResistance has just issued an e-book attacking former Massachusetts Gov. Mitt Romney over the advances made in LGBT rights during his tenure. Christian Newswire has the press release:

Massachusetts pro-family activist Amy Contrada has just released her definitive study of Mitt Romney’s role in implementing “gay marriage,” promoting GLBT “rights,” and supporting the sexual-radical agenda in the Massachusetts schools while Governor. Contrada details how Massachusetts Governor Mitt Romney supported the homosexual and transgender agenda on same-sex “marriage,” sexual-radical indoctrination in the schools, and societal transformation — while posing as a defender of the Constitution and traditional family values. Pro-family leaders enthusiastically recommend the book: Peter LaBarbera (Americans for Truth about Homosexuality) says, “In writing the meticulously documented ‘Mitt Romney’s Deception,’ Amy Contrada has done the job that the liberal media was supposed to do. What she has uncovered is stunning even to experienced critics of Romney’s equivocation on homosexual issues. Contrada lays bare Romney’s servile embrace of the radical Massachusetts ‘gay’ agenda. Then she exposes his subsequent doublespeak in posing as the stalwart defender of traditional marriage in his bid for the GOP presidential nomination.”

Longtime JMG readers may recall Amy Contrada for her 2007 reaction to her daughter Claudia’s coming out while a high school senior. Contrada accused LGBT activists of “perverting” Claudia’s sexuality and yanked her out of school. Then she published a full-page article on the MassResistance site to reveal that Claudia isn’t even biologically hers and was adopted. It really does take a vile repulsive bitch like Amy Contrada to actually make us feel (momentarily) sympathetic to Mitt Romney.