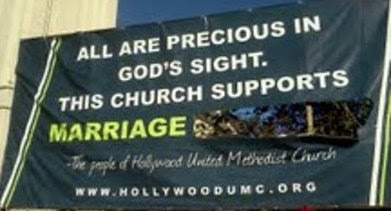 Vandals have literally ripped out equality from the banner of a gay-friendly church in California.

Rev. Kathy Cooper-Ledesma, a senior pastor at the church, said church leaders are asking the congregation to pray for those who defaced their banner. “Our belief that hate is not a Christian value remains firm,” she said. “And while they can take the ‘equality’ out of the banner, they can’t take it out of our understanding of the Gospel.” The iconic church, located on the corner of Franklin and Highland avenues, is over 100 years old, and has been fighting for marriage equality for years, said Chad Darnell, a marketing coordinator for the church. He said this was the second time that a banner was vandalized this month. The first banner was stabbed multiple times and this was the replacement banner.

The church has hosted video shoots for the NOH8 campaign. Police are investigating.

Previous Focus On The Family: Gay Activists Are Trying To Criminalize Teaching The Bible
Next You Are The Champions Of Freeping