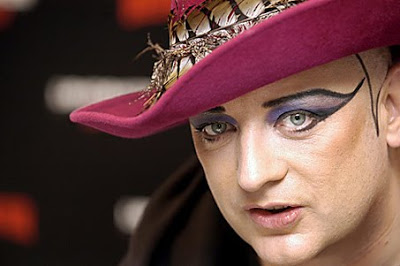 “Oh absolutely, it is happening, we have planned it. We are having our big launch to announce it in October. We’re going to do a big thing in London and then we are going to come on tour next year, and hopefully at that point I will get my visa back for America. I am really hoping on that. We have people working on that right now and when I come to America I guarantee you…[at]…the first gig I’ll probably burst into tears. It is going to be a very emotional experience.

“We’re going to do a huge worldwide tour and we are going to do a record. I am not sure what kind of record it is going to be right now, but we are talking to Phil Ramone about recording a record with him. And also maybe Mark Ronson writing with us—whatever, there are lots of things…being discussed at the moment. Yeah, that is definitely happening. It is our 30-year anniversary and it would be a kind of shame not to mark that occasion.

In 2008 Boy George was denied a U.S. visa due to his legal problems either here or in London, that wasn’t made clear, but apparently the ban remains. I noticed that fabulous Culture Club backup singer Helen Terry tweeted hints of the reunion over the weekend, but so far she hasn’t said if she’ll be part of the tour. Let’s hope.

RELATED: The one time I saw Culture Club in concert was for their 1983 appearance at the Lakeland Civic Center near Orlando, where the opening act was local heavy metal band Four In Legion. Get it? Foreign! Legion! The 10,000 painted queens in the arena were not shaking their dreadlocks when the band launched into their big hit, Party In My Pants. That was the second-worst concert bill I’ve ever seen, topped only by the 1982 Orlando stadium concert in which the B-52s fled the stage under a hail of beer bottles and boos as the opening act for The Who. Poor Joan Jett preceded the B-52s and departed after two or three numbers and a hearty “Fuck YOU, Orlando!” aimed at 60,000 Who fans.

Previous Chris Barron: Marriage Has Been The Province Of The States For 225 Years
Next O’Reilly Interrupts Obama 48 Times