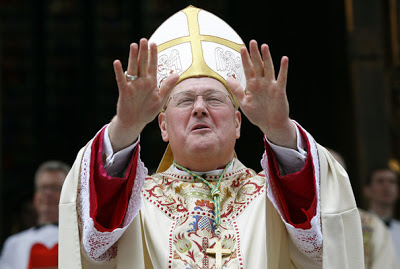 A Wisconsin lawyer representing victims of sexual abuse by Catholic clergy says he suspects that New York Archbishop Timothy Dolan hid $130M in church money in order to avoid paying molestation settlements. Prior to his present assignment, Dolan was Archbishop of Milwaukee.

The lawyer, Jeffrey R. Anderson, who represents clients in 23 lawsuits against the Milwaukee Archdiocese, said $75 million disappeared from the church’s investments in 2005. He said that $55 million more that had previously been unaccounted for appeared in a cemetery trust in 2008, and that the archdiocese claimed that money in that fund was protected by state law and could not be used for payouts. In an interview on Sunday, Mr. Anderson said that the first transfer coincided with a 2005 ruling by the Wisconsin Supreme Court that allowed abuse lawsuits to proceed despite a statute of limitations. He said the second transfer occurred around the time of a similar ruling in 2007. Archbishop Dolan led the Archdiocese of Milwaukee from 2002 to 2009, when he was chosen to lead the Archdiocese of New York.