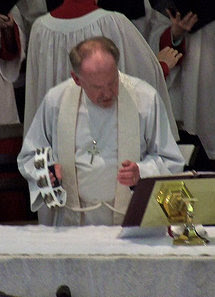 Episcopal Rev. Marshall Brown, who helped 14 Virginia parishes leave the main church in protest of the elevation of openly gay Bishop Gene Robinson, has been fired by his Fairfax, Virginia parish for viewing pornography on church computers. It was Brown’s Truro Church that led the continuing schism in the Episcopal Church over the ordination of gays.

Truro’s rejection of what its congregants saw as a non-biblical liberal tilt in the denomination made international news. Dozens of Episcopal churches have since joined an umbrella group of religious conservatives who oppose the acceptance of same-sex relationships and the idea that non-Christian religions have equal access to God. In 2005, Truro arranged for Brown, now 57, to get treatment for an Internet addiction after he reported having a problem, according to Bishop Martyn Minns, who was Truro’s rector at the time and is now bishop of the Convocation of Anglicans in North America, the umbrella group of breakaway churches.

Since the split with the mother church, Truro has been embroiled in lawsuits over the ownership of its properties, which are valued in the tens of millions of dollars. Nice work, Rev. Busyfingers! So which was it? Manhunt? Sean Cody?