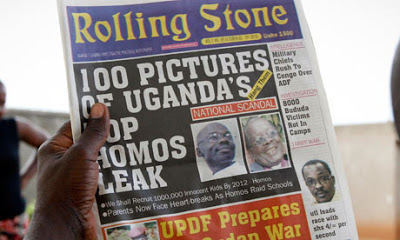 A Ugandan court has ruled that local media may not name “suspected homosexuals” and has awarded damages to those named by Rolling Stone, a newspaper unrelated to the U.S.-based music title.

The request for the ban was filed by three people from gay rights group, Sexual Minorities Uganda (SMUG), whose pictures and towns of residence were published in a previous issue of Rolling Stone. High court judge, Vincent Musoke-Kibuuke also ruled that the petitioners’ lives were threatened since the story exposed them to potential attacks from vigilantes, Onyango said. The petitioners were awarded 1.5 million Uganda shillings (about 650 dollars or 500 euros) and Rolling Stone was ordered to pay all legal fees incurred by SMUG. “We think that the compensation is on the low side, but the principles here are very important,” Onyango said.

In a previous hearing, the judge suggested that Uganda’s law against homosexuality, defined as “carnal knowledge against the order of nature,” should be re-examined. In a series of issues last year, Rolling Stone outed more than 20 people whom its editor believed were gay. The editor, undergraduate student Giles Muhame, said he found some of the photos that were published on a gay dating website. The high court case centred on one story headlined “Hang Them”, in which an unidentified Evangelical pastor called for the execution of gay rights campaigners.

Finally, some good news from Uganda!