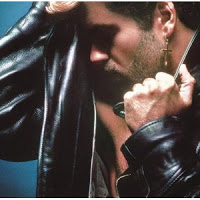 Of the many events that truly define the evolution of global pop at the end of the 20th century, the release of George Michael’s debut solo album, Faith, in November 1987, occupies a special place in music history. Spending 87 weeks on the Billboard 200 albums chart (including 12 weeks at #1 in 1988), a rare RIAA diamond certification (for U.S. sales in excess of 10 million units, the biggest selling album of 1988, by far), and the Grammy Award as Album Of The Year – are just the tip of the Faith iceberg. Added to it are the album’s six top-charted singles: “I Want Your Sex,” “Faith,” “Father Figure,” “One More Try,”“Monkey” and “Kissing A Fool..” Together, they maintained George Michael’s presence on the Hot 100 for a cumulative 85+ weeks, from 1987 to 1989. Written, produced and arranged entirely by George, Faith was a singular achievement that placed him at a level of royal stardom in the ’80s alongside Michael Jackson, Elton John, Paul McCartney and Madonna.

We have five copies of Faith Remastered to give away. Enter to win by commenting on this post. Only enter once and please remember to leave your email address in the text of your comment. Entries close at midnight on Thursday, west coast time. Publicists: If you’d like to take part in Swag Tuesday on JMG, please email me.

JMG BONUS: If you purchase Faith Remastered in advance of the February 1st release date, you’ll receive an immediate free download of the Freemasons’ remix of I Want Your Sex.

Previous All Gay’s Go To Hell
Next SCHENECTADY: Bigots Complain To City Council About “I Am Gay” Billboards