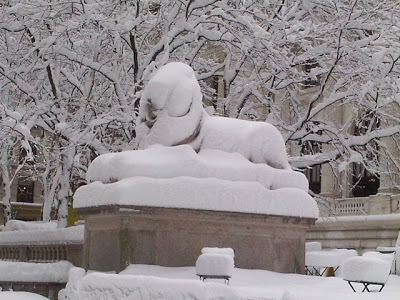 NYC Mayor Bloomberg this morning announced the closure of all city offices and made the very rare move of announcing a snow day for public schools after almost two feet of white stuff clobbered the city in the last 24 hours. By the way, thundersnow sounds rilly, rilly weird.

“New York City almost never takes a snow day, but today is one of those rare days,” the mayor said in a statement. This storm was the eighth-largest in city history. Central Park received 19 inches of snow overnight, in addition to the four inches that fell on Wednesday. Other totals include 18 inches in Pelham Parkway House in the Bronx; 13 inches in Sheepshead Bay, Brooklyn; 17.3 inches in LaGuardia Airport and 10.3 inches in John F. Kennedy Airport in Queens; and 16 inches in Eltingville, Staten Island. All parking rules have been suspended for Thursday as a result of the storm. As fast-falling snow clogged city streets, the MTA suspended bus service throughout the five boroughs at 12:25 a.m. The MTA’s decision came on the heels of numerous reports throughout the city of buses being stuck in the hard-to-navigate snowy conditions.

Some subway lines are running with local service only and bus service is expected to resume in some parts of Queens this morning. With 39″ so far, this is now the snowiest January in NYC history. The previous record from 1927 was 27.4 inches. If you’re home today, Gothamist has a list of where to go sledding.