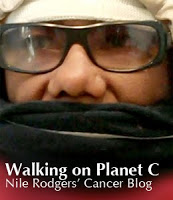 They told me my cancer was high-grade. I had never heard of the Gleason Scale, the number that grades prostate cancer, prior to my diagnosis. My cancer sat at the head of the class. I’d been rapidly falling apart since CHIC opened for Earth, Wind and Fire a few weeks earlier. I had lost muscle control and couldn’t hold my guitar pick. I panicked – but finished the show using my bare finger. For the next few weeks, things continued to worsen and I’d have many painful neurological tests that felt one step below medieval torture. They revealed nothing, but still, I couldn’t grip anything.

We wish him well.