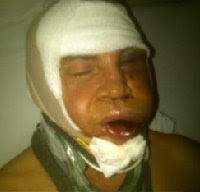 Yesterday a 52 year-old gay man suffered grievous facial injuries after a patron at a Shreveport, Louisiana bar attacked him with a billiards cue stick because he is gay. Witnesses say the two men hadn’t even spoken before the attack.

Security personnel at the Sandbar held the alleged attacker, William Payne until police arrived. Payne was arrested and charged with attempted 2nd degree murder and the commission of a hate crime. “It was totally 100 percent a hate crime for this sexual orientation,” said Sandbar manager Tim Huck. The bar provided police with video surveillance. Huck says it’s disturbing, and shows Payne who is a large man, breaking the cue stick over victim John Skaggs’ face with one powerful blow. “His hand was all the way back, and he’s swinging like a baseball bat, after three aggressive steps in,” said Huck.

Shreveport police believe that the video will be powerful evidence of the alleged attack, and management at the Sandbar believes it will also help distinguish between a crime and a hate crime. “At no point in time had he talked to the man that attacked him, bumped him. After watching the video and from witnesses they hadn’t even made any form of eye contact or anything,” said Huck.

The bar manager says the victim was a regular patron who “never bothers anyone.”