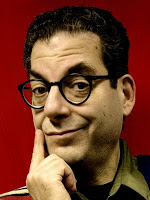 “Calvin, darling, you’re embarrassing yourself. What’s worse, you’re embarrassing the whole community. You were never really that much of a gay hero in the first place. Remember when you suddenly had a wife because, as AIDS made it uncool to be gay, you took the wussy way out and closeted yourself so you could sell more T shirts and perfume? That was a hideous approach and I screamed my lungs out about it–but it was better than now! Now you’ve hooked up with that almost-21-year-old ex-porn star, Nick Gruber, and you’re fawning over him as if this were real love and not a massive late-life crisis being acted out for the horrified masses. It’s not going to work!” – Michael Musto, dishing Calvin Klein for the invitation to Gruber’s birthday party, which describes the event at “the hottest ticket for New York’s gay and fashion elite!”