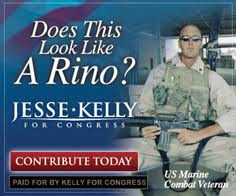 Here’s How Giffords’ Opponent Sold Himself In The 2010 Campaign Andrew Sullivan: “If you are not disturbed by what it proclaims as the essence of true conservatism – a sunglasses wearing soldier with a machine gun in his open crotch – you should be.”

NOTE: For those unaware, “RINO” means “Republican in name only.” The acronym is commonly used on sites like Free Republic to mock members of the GOP who express anything other than hard-right philosophies. Similarly, some Democrats have taken up “DINO” to describe Blue Dog Dems and other Democrats who support right-of-center ideals.