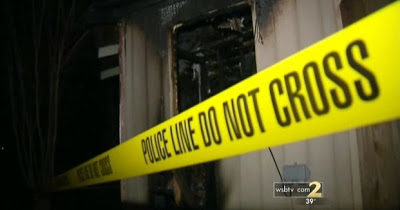 Police are investigating an arson fire at the home of a Carroll County, Georgia gay man after the victim reported having a rock hurled through his window with an anti-gay death threat attached.

Chris Staples said someone threw a rock through his window with a piece of paper attached that was covered in anti-gay slurs. “I was watching TV and just finished smoking a cigarette and I heard this big thud. Boom!” Staples told Channel 2’s George Howell. The rock had a threatening note attached. “It said, ‘we know you’re gay. And God hates gays. You won’t be raping anybody in the county and God’s going to make sure that you burn in hell.’ And something about my daddy… my daddy will make sure you burn in hell.” Then hours later, he woke up to flames filling his bedroom.

Staples says he barely had time to escape before his home was destroyed. Investigators are treating the case as a possible hate crime.

Previous IOWA: We Hate You, Have A Cookie
Next RUSSIA: Suicide Bomber Kills Dozens, Injures Over 100 At Moscow Airport