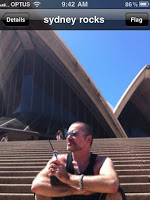 An Australian newspaper is breathlessly reporting that George Michael is spending his downtime in Sydney by cruising men on the iPhone app Scruff. And that’s apparently news because he usually works it on Grindr.

Now a fixture on the Northern Beaches after arriving in town for New Year, the on-the-prowl performer has apparently joined Scruff, a new iPhone application marketed to “bears, furred, inked, uniformed, jocks, geeks and more”. According to the app’s description: “Meet hundreds of thousands of scruffy gay guys in your neighbourhood.” The profile said to be Michael’s is operating under the screen name “Sydney rocks”. Like Grindr, which the swinging singer used during his extended Aussie jaunt last year, Scruff is location-based, using the iPhone’s built-in GPS to instantly “connect” with other users in the same area.

And right now half of you are searching your iPhone for “Sydney Rocks.”