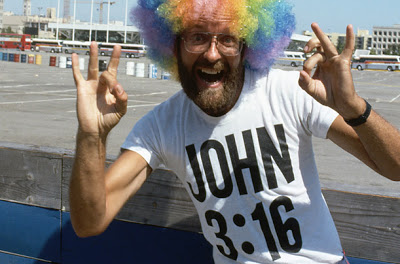 World Net Daily is upset because Fox has rejected a Super Bowl ad promoting the scripture John 3:16, which became famous for being seen at major sporting events thanks to Rollen “Rainbow Man” Stewart (seen above). They quote the ad’s maker:

“In the midst of the commercials on everything that’s trivial,” Taunton says, “wouldn’t it be wonderful if after this year’s Super Bowl, in addition to talking about the game, people were talking, not about beer or potato chip commercials, they were talking about the gospel? Well, that’s what we want to see happen.” After a few months of working on the commercial and raising funds for its broadcast, however, Fox sent what Taunton calls “a carefully worded document” explaining the network “would not air anything with religious doctrine.”

Not incidentally, Rainbow Man is now presenting his “message of real hope” from prison, where he is serving three consecutive life sentences for kidnapping.

Previous Intercourse The Penguin
Next This Week In Holy Crimes