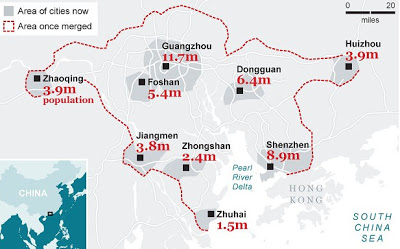 Chinese urban planners will join nine large cities near Hong Kong into one sprawling 16,000 square mile city which will be 26 times larger than London. With 42 million people within its boundaries.

The new mega-city will cover a large part of China’s manufacturing heartland, stretching from Guangzhou to Shenzhen and including Foshan, Dongguan, Zhongshan, Zhuhai, Jiangmen, Huizhou and Zhaoqing. Together, they account for nearly a tenth of the Chinese economy. Over the next six years, around 150 major infrastructure projects will mesh the transport, energy, water and telecommunications networks of the nine cities together, at a cost of some 2 trillion yuan (£190 billion). An express rail line will also connect the hub with nearby Hong Kong.

The project includes 3100 miles of new high-speed rail lines. By the end of the decade, China plans to create even larger mega-cities with populations of 50 – 100 million.