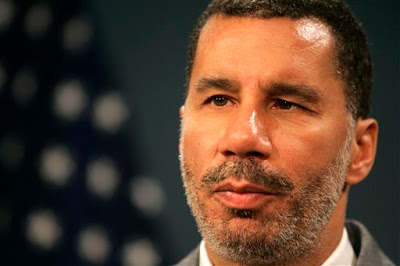 As his final day in office winds to a close for Governor David Paterson, LGBT New Yorkers should offer him our thanks for being the most relentlessly and loudly pro-gay governor in state and arguably, national history. Our state movement’s two most important pieces of legislation, GENDA and marriage equality, remain unattained, but that, of course, is due to our clown car of a state Senate and is no fault of the governor’s.

Paterson, to his everlasting credit and over the loud protests of bigots, issued an executive order protecting state employees in New York from discrimination based on gender identity and expression. In May 2008, he directed state agencies to recognize out of state same-sex marriages, a move countered by numerous (and unsuccessful) lawsuits. And if there was a marriage equality rally or an angry protest, we usually showed up to find Governor Paterson at the podium or on a bullhorn. Probably my most memorable moment of Paterson’s tenure was watching him stand in a pouring rain in Washington Square to deliver an impassioned speech against the bullying and abuse of LGBT youth.

And let’s not forget Gov. Paterson’s unexpected selection of an obscure upstate legislator with wobbly bona fides to fill the formidable shoes of then Sen. Hillary Clinton. Many questioned that move at the time (myself included), but Sen. Kirsten Gillibrand has surprised us all and turned into a powerful and effective advocate for LGBT New Yorkers. Sen. Gillibrand may turn out to be Paterson’s most enduring legacy for the good of our movement.

We’ve had the occasional disagreement with Gov. Paterson, in particular the continuing exclusion of indigent HIV patients from the state’s rent relief program for the seriously ill. But even that bad decision grew out of the state’s financial morass and not from animus. Today, let’s thank Governor David Paterson for his support of the LGBT community and hope that one day soon, we’ll again see thousands of New Yorkers happily marching in the NYC Pride Parade wearing stickers proclaiming “We Luv Our Guv!”