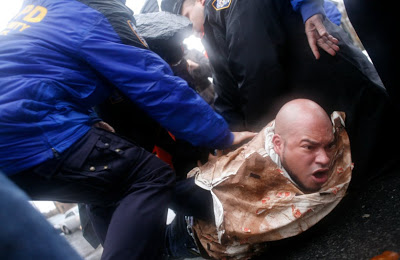 Nine people were arrested this morning outside of a breakfast meeting hosted by NYC Mayor Michael Bloomberg in a protest about the exclusion of indigent AIDS patients from a state housing program that caps the rent of ill people on public assistance at 30% of their income. More photos from the protest are here. Video is here. At Bloomberg’s urging, earlier this year Gov. David Paterson vetoed a bill that would have brought indigent AIDS patients into the program. Paterson said it was the hardest veto he’d ever made. NYC doesn’t have the money to help poor people with AIDS feed themselves, but they do have the money to change the fucking font on every fucking street sign.

Previous SF AIDS Foundation – It Gets Better
Next GOP Senators: We Will Block 100% Of All Bills Until Bush Tax Cuts Are Extended