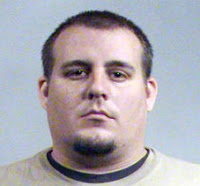 An 26 year-old veteran who lost both his legs in Iraq has been charged with stalking members of the Westboro Baptist Church after police found him following the Westboro family van in a car stocked with handguns, a rifle, and dozens of rounds of ammunition.

Sedgwick County sheriff’s detectives arrested Newell mid-morning Tuesday in the Wichita City Hall parking lot after a detective saw him following a van that carried Westboro church members. The church members were meeting in City Hall with police officials. Detectives found Newell in a vehicle backed into a parking space. In the vehicle, investigators found two handguns, a rifle and more than 90 rounds of ammunition, sources have said. The stalking charge accuses Newell of actions targeted at Westboro members and putting them in fear for their safety. The weapons charges accuse him of unlawfully carrying and concealing or possessing with “intent to use” an M4 rifle, .45-caliber Glock handgun and .38-caliber Smith and Wesson handgun.

At Newell’s arraignment several lawyers arrived to offer pro bono defense services, prompting the judge to quip, “The more, the merrier.” Reportedly “many other lawyers” have contacted him with the same offer. Newell, who uses a wheelchair due to difficulties adjusting to Army-supplied prosthetic legs, pleaded not guilty via a video link from his cell. He is being held on $500,000 bond on one felony and several misdemeanor charges. Other charges may be filed pending the result of an FBI search of his home.

Westboro’s Megan Phelps comments on Twitter: “Peacefully protesting institutionalized sin on public sidewalks == loading up your car with weapons & lying in wait to commit murder. But somehow, in the totally backward minds of many of you, the former (loving our neighbor) is worse than the latter (planning murder)! Wtf?” Phelps claims that Newell was planning to murder her parents and the 26 children in the Westboro clan.

A defense fund has been set up for Newell via several popular conservative websites. Late this afternoon the Facebook page “Let Ryan Newell Go” was established. Westboro will continue with their planned Hanukkah picket of a Harvard student Jewish group tomorrow.

Westboro spokeswoman Shirley Phelps-Roper said today: “Here is what I expect to happen: This guy is going to be called a hero, he may get a parade.” People “will line up to sing his praises, to pay his legal fees and to get him a lawyer,” she said. “Then he will be permitted to plead to some nothing charges.” Phelps-Roper also said, “We’ve had communication about a federal investigation” involving Newell.