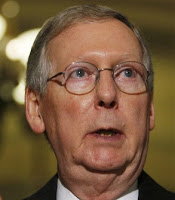 GOP Senators: We Will Block 100% Of All Bills Until Bush Tax Cuts Are Extended Today all 42 GOP members of the Senate issued a letter declaring that not one single bill (including DADT) will be considered until Congress agrees to extend the Bush tax cuts to the wealthy. Because when you’re out of money, the thing to do is cut your income. And so much for yesterday’s bipartisan summit.

“[W]e write to inform you that we will not agree to invoke cloture on the motion to proceed to any legislative item until the Senate has acted to fund the government and we have prevented the tax increase that is currently awaiting all American taxpayers,” the letter reads. “With little time left in this Congressional session, legislative scheduling should be focused on these critical priorities. While there are other items that might ultimately be worthy of the Senate’s attention, we cannot agree to prioritize any matters above the critical issues of funding the government and preventing a job-killing tax hike.” It was penned by Senate Minority Leader Mitch McConnell, and signed by all 42 Republicans. According to the AP, which first broke the news of the letter, and portrayed it as a GOP effort to block all Dem initiatives unilaterally, the START treaty would be exempted. But everything else — particularly DADT, unemployment insurance and the DREAM Act would be ensnared.

And once again the billionaires of America fuck over the rest of us.

Previous NEW YORK CITY: Nine Arrested At Bloomberg AIDS Housing Protest
Next SHOCKER: The Wealthy White Men At GOProud Want To Keep Their Tax Cuts At The Expense Of Homosexuals