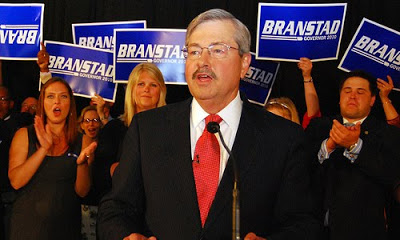 He hasn’t even taken office yet, but today GOP Iowa Governor-Elect Terry Branstad demanded that state lawmakers allow the public to vote on repealing gay marriage.

Speaking at a gathering organized by The Associated Press, Branstad noted that voters removed three Iowa Supreme Court justices after a campaign that targeted them for their support of a unanimous 2009 ruling that legalized same-sex marriage in the state. “The Supreme Court, I think, made a tragic mistake in their decision on same-sex marriage,” said Branstad. The voters of Iowa have overwhelmingly rejected three members of the Supreme Court because of it and I think we need to restore support for the judicial system, and one way to do that is to give people the opportunity to vote on restoring the one-man, one-woman marriage.”