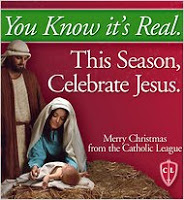 Days after the American Atheists posted their “You Know It’s A Myth” billboard at the New Jersey entrance to the Lincoln Tunnel, the Catholic League has erected an answering billboard at the other end.

Bill Donohue, president of the Catholic League, a lay civil rights organization that receives no church financing, said that an anonymous donor in Manhattan came up with the money — about $18,500 — to buy the 26-by-24-foot billboard at Dyer Avenue and 31st Street for about a month. It went up Monday afternoon. Mr. Donohue said the billboard was not intended as “a statement against atheists or agnostics, most of whom are good people,” but as a repudiation to “aggressive, militant atheism” that he believes is growing increasingly prevalent in America. Joseph Zwilling, the director of communications for the Archdiocese of New York, said that while the Catholic League does not speak on the Archdiocese’s behalf, he thought the billboard “articulated the reality that Catholics and Christians believe in Jesus.” “Jesus historically lived, there’s no doubt about that,” Mr. Zwilling added. “He was a real person in a real time, and for Catholics and Christians we believe he was the son of God.”

Actually, a lot of us “aggressive, militant atheists” aren’t so sure that “Jesus historically lived” at all.