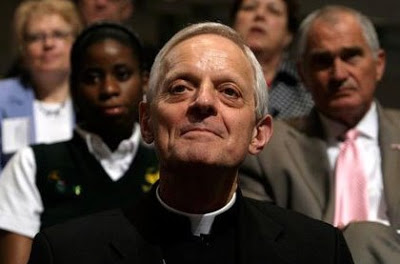 The Catholic Church now says it will not advocate against the implementation of the repeal of DADT.

Washington Cardinal Donald Wuerl says the Roman Catholic church has no position on whether gays and lesbians should be allowed to serve openly in the military. On Fox News Sunday, Wuerl was asked if he opposed Congress’s repeal of “don’t ask, don’t tell” — a repeal that President Barack Obama signed into law last week. He said, “That’s a question that has to be worked out politically.” But Wuerl, who is archbishop in the nation’s capital, reiterated church teaching that sex should be reserved for marriage between a man and a woman. He added that if the church is forced to accept a redefinition of marriage, its ministry becomes limited.