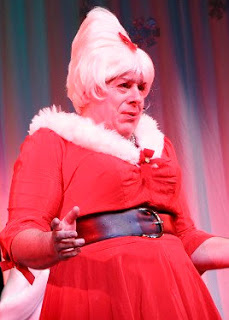 – Michael Urie (Ugly Betty) will replace Christian Borle as Prior Walter in the critically raved Off Broadway revival of Tony Kushner’s Angels In America. Urie steps in on February 2nd, the production has been extended until March 27th.

– Whoa. Jackie Hoffman (love her!) is talking serious trash about her role in The Addams Family. “We’re the only musical that doesn’t appeal to gay people.” But it has Nathan Lane and (JMG reader/Tony nominee) Kevin Chamberlin in it! – Beginning previews Off Broadway on December 22nd is Richard Skipper As “Carol Channing” In Concert. Get tickets here.

– ABC is developing a drama for Tony winner Idina Menzel (Wicked), who will play a single mom who sings at weddings and bar mitzvahs to pay the rent. Menzel makes her debut with the New York Philharmonic on February 5th.

TRAILER: Spider-Man: Turn Off The Dark. Still in heavily-laden with tech glitches previews. Previous GOP Reps Call For Unfunding The Smithsonian Over Gay Exhibit
Next Sarah Palin: Jan Brewer Has The Cojones That Obama Should Have On Immigration