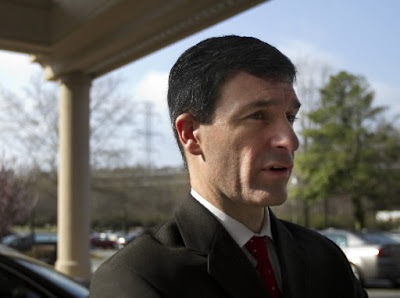 Saying that he has divined the original intent of the writers of the U.S. Constitution, teabagger Virginia Attorney General Ken Cuccinelli has decreed (PDF) that Christians may now use public property, included their government offices, to declare and celebrate their faith. The Liberty Counsel exults:

In a detailed opinion, Cuccinelli shed light on the original intent of both the United States and Virginia Constitutions in regards to freedom of religion and concluded that the “establishment of religion” clause does not, in fact, compel local governments to restrict religious speech on public property. He further stated that the local governments themselves may recognize such religious holidays as Christmas, as long as religious symbols are accompanied by secular ones. Cuccinelli addressed an issue that many Christian employees face throughout the year, dealing with the right of public employees to display religious artwork or symbols in their offices. He concluded that only under certain limited conditions could the government restrict the religious speech of its employees.

That sound you hear is thousands of photos of Jeebus being hung on the walls of local town halls, DMV offices, classrooms, and court houses.

Previous Bryan Safi Wants To Be On The A-List
Next Tweet Of The Day – Sen. Harry Reid