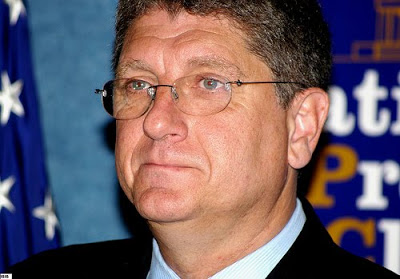 Infamous anti-abortion activist Randall Terry says that he will run for president in 2012. But he’s doing so in order to exploit advertising rules that prevent television stations from refusing or editing the ads of political candidates. Terry plans to solicit donations that will allow him to air graphic images of aborted fetuses on stations nationwide. Catholic Online reports that the strategy was successfully test-run this year in a local Washington DC race:

The 2010 campaign for the seat of Delegate to the U.S. House of Representatives for Washington, DC, was also a test run for Pro-life candidates as Missy Smith used pro-life graphic ads that illustrated the truths of abortion. While Eleanor Holmes Norton was re-elected, Smith’s ads were allowed to run and we seem by scores of people in and beyond the District of Columbia. The ads were run more than 235 times with repeats given during media coverage of the campaign. Smith’s Campaign Manager, Randall Terry, indicated this past Friday that, based on the results of the Washington campaign strategy, they are planning to enlist 25 new candidates to run in the 25 largest media markets in America for the 2012 elections.

Randall Terry: “I am under no delusion that I can win. But we know that debate concerning the truth of abortion could brought into the political spotlight just by carefully placing one ad on national TV before Super Tuesday.”