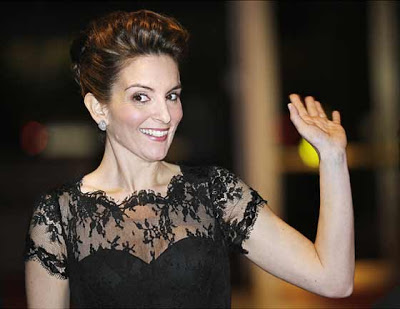 Quote Of The Day – Tina Fey “And, you know, politics aside, the success of Sarah Palin and women like her is good for all women – except, of course –those who will end up, you know, like, paying for their own rape ‘kit ‘n’ stuff.’ But for everybody else, it’s a win-win. Unless you’re a gay woman who wants to marry your partner of 20 years – whatever. But for most women, the success of conservative women is good for all of us. Unless you believe in evolution. You know – actually, I take it back. The whole thing’s a disaster.” – Tina Fey, accepting the Kennedy Center’s Mark Twain Prize. However, television viewers didn’t hear Fey say that because PBS edited it out of the broadcast. The network says the show simply ran long and that they “snipped from everybody.” Right.

Previous British Newspaper’s “Win The Cover” Contest Results In Gay Marriage Proposal
Next American Family Association: The Medal Of Honor Is Girly Because We Give It To Soldiers That Haven’t Actually Killed