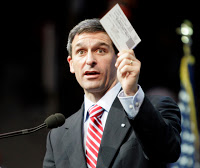 Quote Of The Day – Ken Cuccinelli “Now, Americans endlessly debate the meaning of each part of the Constitution. But one thing that every American should be able to agree on, if you think in terms of Venn Diagrams–I was an engineer before I was a lawyer, so I do things like this–the circle of power that represents federal power under the Constitution must be entirely within the circle of power exercised by King George III and the Parliament of Great Britain. Otherwise, why rebel? And, yet, here we have a Congress and a president who are exercising power that even Parliament and King George III acknowledged they did not have.” – Virginia Asshat Attorney General Ken Cuccinelli, invoking the threat of revolution over “Obamacare.” Cuccinelli is part of a group of 20 GOP state attorneys general suing the federal government to prevent poor people from getting insurance.