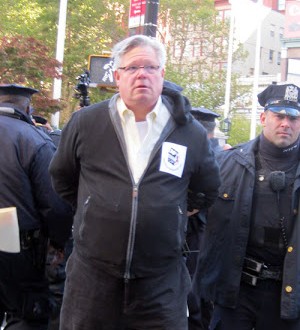 Openly gay and openly HIV+ New York state Sen. Tom Duane was arrested along with several other AIDS activists in a protest at City Hall tonight.

The act of civil disobedience was meant to draw attention to a housing bill that was vetoed by the governor earlier this year. The bill would insure that poor people living with HIV/ AIDS wouldn’t have to spend more than 30 percent of their income on rent. Advocates argue the bill saves money in the long run, by lowering the rate of evictions and homelessness. Governor David Paterson vetoed the bill at Mayor Michael Bloomberg’s urging. Both men call it an unfunded mandate that neither the city or state can afford. Advocates say the bill would affect about 10,000 low income New Yorkers living with HIV and AIDS.

At the time of the veto, Gov. Paterson remarked that it was the hardest decision he’d had to make since taking office.

Previous God Loves Homosexuals SO Much, He’s Gonna Kill The Fuck Out Of Them
Next Glee Spoiler: The Bullying Episode