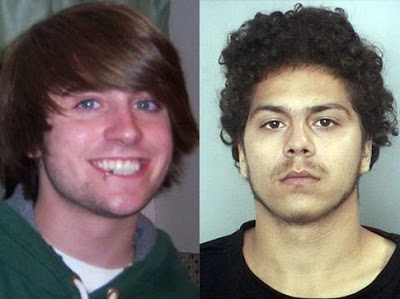 Jeromie Cancel (above right) has been found guilty in the murder of Manhattan college student Kevin Pravia, who was strangled in his apartment by Cancel after the part allegedly met to conduct a drug deal in Union Square. The defense had implied “gay panic” as a reason for the murder. Duncan Osborne reports at Gay City News:

The trial opened on November 4 and the jury began deliberating late on November 17, broke for the day, and found the 24-year-old Cancel guilty of second-degree murder, the one charge he faced, before 11 a.m. on November 18. The defense said that Cancel was under the influence of an extreme emotional disturbance when he strangled the 19-year-old to death, but the jury clearly rejected that argument. Michael Alperstein, Cancel’s attorney, implied that his client’s emotional state was caused by a gay sex act between Cancel and Pravia. Alperstein called a psychiatrist and a psychologist who testified to Cancel’s troubled history, but neither witness said he was compelled by an extreme emotional disturbance during the crime.

Cancel faces 25 years to life in prison at his sentencing next month.