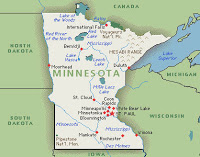 Via a press release from Marry Me Minnesota, we learn of a positive development that took place last week.

On November 24th, Minnesota Fourth District Court Judge Mary S. DuFrense denied a motion by the Minnesota Family Council to intervene as defendants against a lawsuit brought by three same same-sex couples and one minor child to strike down Minnesota laws that deny marriage equality. In her rebuff to the Minnesota Family Council and its multi-million dollar backers in the Arizona-based Alliance Defense Fund, Judge DuFrense held that the Council’s “strong feelings” and “purely ideological” interest in the lawsuit do not give it standing in court. “We appreciate the Judge’s decision to deny the Minnesota Family Council’s motion and believe it ensures that our case will be decided on its merits, without the interference of anti-gay ideologues,” said, Douglas Benson, Executive Director of Marry Me Minnesota, a non-profit organization formed by the litigating gay couples. The couples’ lead attorney, Peter J. Nickitas of Minneapolis, declared, “This decision is a great victory for the plaintiffs and their families, marriage equality, and the integrity of the court system.”