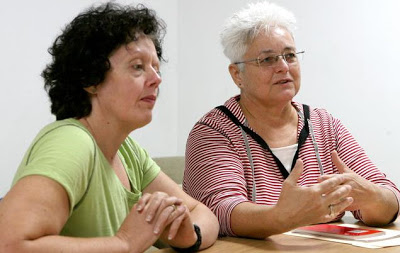 Benedictine University in Springfield, Illinois has fired administrator Laine Tadlock (above right) after her Iowa wedding announcement was published in the local newspaper. Tadlock says the university knew she was gay when she was hired and even knew about her impending wedding. The issue appears to be that Tadlock’s employer was named in the announcement.

In a Sept. 30 letter to Tadlock’s attorney, Benedictine President William Carroll wrote, “… By publicizing the marriage ceremony in which she participated in Iowa she has significantly disregarded and flouted core religious beliefs which, as a Catholic institution, it is our mission to uphold.” Tadlock was offered early retirement Aug. 27. Tadlock met that day with Carroll and Mike Bromberg, dean of academic affairs. Tadlock said Carroll told her he had consulted three Catholic bishops about the situation, including Bishop Thomas Paprocki of the Springfield diocese. At least one person, Catholic activist Steve Brady of Petersburg, said he complained to Paprocki. He also wrote and sent e-mails to other church officials condemning Tadlock and Benedictine following the announcement’s publication. Paprocki had been installed as bishop only a couple of weeks before that. “He politely and respectfully told me it was a personnel matter and he couldn’t discuss it,” Brady said.

The local Catholic diocese has refused comment, saying the firing was a university matter.