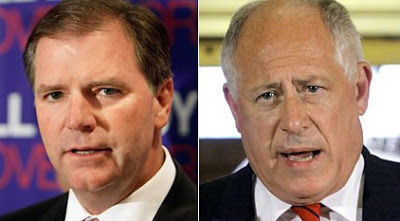 Illinois Gov. Pat Quinn was named the gubernatorial winner late this afternoon and state Sen. Bill Brady has conceded. Quinn, who took over after disgraced former Gov. Rod Blagojevitch got the boot, was strongly backed by Equality Illinois due to his broad support for LGBT rights. (However Quinn favors civil unions over full marriage equality.) Brady had proposed a constitutional ban on same-sex marriage and reportedly wanted to excise gays from employment and housing protections granted by the Illinois Human Rights Act.

According to the above-linked story, Equality Illinois distributed 450,000 absentee ballots on Quinn’s behalf. Today CBS News reports that Brady was trailing by only 19,000 votes when he conceded that he could not make up that deficit among the uncounted votes.