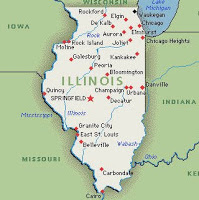 The Illinois General Assembly is expected to vote on civil unions today and it looks like the vote may be very close. Kevin Wayne reports at Chicago Pride:

As the probable Tuesday vote looms, Equality Illinois and The Civil Rights Agenda (TCRA) continued to lobby legislators in support of the bill late Monday. Both advocacy groups have returned to the Capitol early Tuesday morning. “We are just a few votes away in the House for victory,” Equality Illinois public policy director Rick Garcia told ChicagoPride.com Monday night. “We are working this evening in firming up our yes votes and making sure that all of our yes votes are on the floor tomorrow.” “I’m feeling good about this,” said Jacob Meister, TCRA Board Chairman. Meister’s group along with LGBT change have contacted over 16,000 LGBT and allied voters, through an aggressive lobbying project over the last month. He said they have successfully been able to reach into “swing and persuadable districts” through what he describes as “sophisticated micro-targeting.”

If the bill passes in the Assembly, it will go directly to the state Senate for a concurrence vote, where it is expected to pass. Illinois Gov. Pat Quinn has promised to sign it.