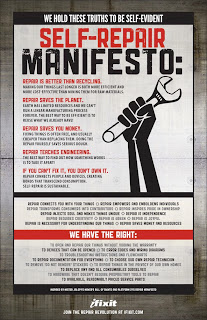 If You Can’t Fix It, You Don’t Own It Electronics self-repair site iFixit has issued a manifesto against Apple and other manufacturers that purposely create products that thwart any repair attempts by their owners. An excerpt:

Manufacturers push new models every year with just enough style tweaks to make our last one feel obsolete. They use legal threats to keep repair manuals away from us and deploy so-called ‘security bits’ in new products to prevent us from opening our own things. They have even gone so far as patenting screw heads to keep us out of our stuff. The manufacturers tout their green credentials by citing take-back programs and recyclable materials, but that’s a a misdirection. Recycling isn’t good enough! Recycling is just efficient urban mining. Recycling destroys the captured energy invested to manufacture things, requiring even more energy to melt it down and make something new. And products made from the resulting material (particularly plastics) are substantially lower quality. We’re much better off using existing things as long as physically possible.

iFixit provides self-repair tips for the iPod, the Xbox, and numerous other digital toys.

Previous PREVIEW: Sarah Palin’s Alaska
Next FEDS: Even If You Friend Your Boss, He Can’t Fire You For Facebook Dissings