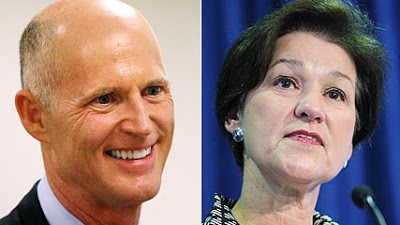 Florida gubernatorial candidate Alex Sink just conceded the race to teabagger Rick Scott, who spent $75M of his stolen-from-the-people fortune to buy his way into a slim victory. In 2002 Scott’s hospital group paid the largest federal fine in history, a multi-billion dollar judgment assessed for pervasive and systematic Medicare fraud, yet Scott still walked away with $350M of that stolen money. (Scott invoked the Fifth Amendment exactly 75 times during the trial.)

Rick Scott is also the founder of the astroturf group, Conservatives For Patient Rights, which pretends to be a citizens group advocating for less government oversight of the health care industry. He has vowed to sue the federal government to overturn health care reform in Florida. And as you’d expect, he is also a vicious homophobe who opposes any LGBT rights law you’ve ever heard of. It’s a terrible day for Florida.