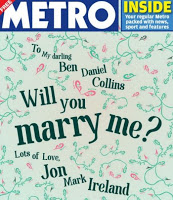 The British version of Metro, a free daily newspaper, held a contest in which the winning reader would be allowed to use the front page for whatever reason they liked. The winner decided to use the space to propose to his boyfriend of five years. Here’s how his partner got the news.

Having missed out on his own copy from the station on his way through, it was a fellow Tube passenger’s Metro that caught Ben’s eye. Clocking his name, the 23-year-old panicked at the sight of it on the front cover. ‘I don’t always get a Metro at my station – depending on the time of the morning there can be hardly any left,’ he explained. ‘So I didn’t get a Metro this morning and, on the train, this guy was reading it in front of me. ‘Then I saw my name and I thought “what?” I sort of blinked twice, then I’m looking around for a Metro – I gave up my seat to try to find one. ‘When I found one and saw the front cover properly it was a shock – and as soon as I got above ground again at Marble Arch I had five or six missed calls on my phone from people asking if I’d seen it.’ Ben eventually gave his partner a resounding ‘YES’ when the pair were able to get through to each other a few hours later – after Ben initially texted Jon with the promise: ‘I’m going to kill you!’

The couple says they may tie the knot on their next anniversary in May.