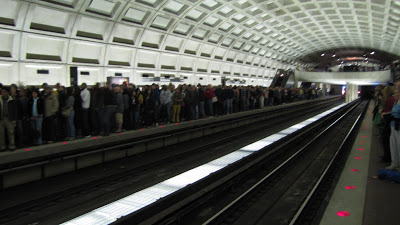 By preliminary estimates, Metro recorded 825,437 Metrorail trips on Saturday. Whether it served any of those riders very well is different question. The demand for public transit to attend the Rally To Restore Sanity and/or Fear — hosted by Comedy Central duo Stewart and Colbert — exceeded supply. Metro customers suffered long waits at various Metro stations throughout the city. Several even suffered injuries. Nevertheless, the new record fairly shattered the old record, set on June 8, 1991, when Washington played host to a victory celebration for U.S. troops who served in the First Gulf War. That day Metro recorded 786,358 trips. A 1997 Promise Keepers rally in the District has the third-place record, with 735,909 trips.

Of course, we’ll never know how many more people were turned away from using the subway (as was my group) because the cops were freaking out about how crowded the platforms were. We ended up walking the hour or so from our hotel to the Mall and it was amazing to look down the side streets and see tens of thousands of people streaming up from all directions.

RELATED: Despite the ridership count and all the other attendance reports, the Freepers are, of course, declaring that the lamestream media are conspiring to cook the head count so that Glenn Beck’s rally looks smaller in comparison.