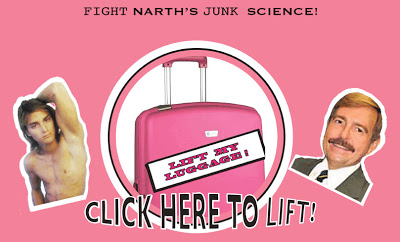 Truth Wins Out, our heroes in the battle against the cruelties of the “ex-gay” industry, have launched the Lift My Luggage! website to promote their November 6th protest at the annual convention of NARTH in Philadelphia.

The National Association for Research and Therapy of Homosexuality (NARTH) is having its annual convention in Philadelphia (Nov. 5-7). The notorious “ex-gay” group is hoping that Americans have amnesia and don’t remember that its most “prominent” board member, George Rekers, was forced to resign in May. Rekers stepped down after he was caught vacationing with a male escort he met on RentBoy.com. When asked why he had hired the young man, Rekers said it was to, “lift his luggage.” As the infamous quacks at NARTH gather for their annual convention, let’s Remind America that NARTH is a pseudo-scientific organization that is more about Rent Boys than research.

As noted above, JMG is a co-sponsor and I’m already on the hunt for a fabulous pink suitcase to wheel up to the doors of the NARTH convention. Visit the Lift My Luggage! site for directions to the event. I hope to see lots of you in Philly on November 6th! Drinkies at Woody’s after?