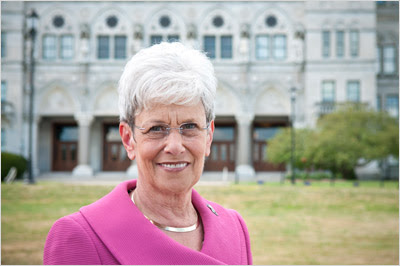 As the CFO of a state agency in Connecticut for many years, I attended monthly meetings of the State Bond Commission where I would present and explain projects needing funds to a panel including the Governor, the Attorney General, the State Treasurer and Nancy Wyman, the State Comptroller, or her openly gay Deputy, Mark Ojakian. I developed a respect for these two dedicated public servants who delivered many years of efficient financial management and who made diversity and safety for LGBT people in the workplace look natural and easy.

Now, Nancy Wyman is in the final week of her campaign to become Connecticut’s Lieutenant Governor as the running mate of Dan Malloy, the Democratic candidate for Connecticut Governor. I was delighted that she agreed to answer a few questions for the readers of JoeMyGod.

Any message for them?

I just have no idea what they are afraid of. It just makes sense to not stand in the way of letting people love and live as they prefer.

Have you always been supportive of the concept of same-sex marriage and LGBT rights in general?

As a straight married wife and mother, why were you always such a strong advocate for LGBT rights?

It might be due in part to the way I was brought up by my parents. Everyone was welcome in our home. I learned the importance of taking time to get to know people. Once you know somebody, you respect and value them. It might be due in part to the fact that my husband was passed over for promotions in a large Connecticut insurance company because he is Jewish. We had to fight for our rights just as you had to fight for your right to be out and comfortable as a state employee. I’ve been very happy to see the state government workplace improve over the years for LGBT employees. I’ve been lucky to have Mark Ojakian who was the highest ranking out state employee as my Deputy. I’m proud of Kevin Lembo who is also an out gay man and was in my agency and is now running for my previous position as State Comptroller.

We still need to do more outreach to young LGBT people who get bullied. We are just now realizing how extensive and serious a problem this is. It’s shocking and sad and we have much work to do to change this.

Any final message for the readers of JoeMyGod?

Yes. Please vote. No matter what state you live in.