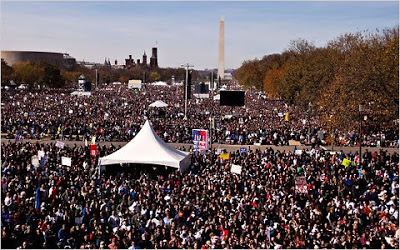 Today’s Rally For Sanity in DC was an astounding success by most measures, except, ahem, for those of us who only arrived two hours early and still couldn’t get within miles of the stage or Jumbotrons. In fact, most of the time we were too far away to even hear the public address system. On top of that, the Metro was insanely overloaded, prompting DC police to close the entrance to some stations for safety reasons. Hello, walking for miles. I’ll recap the day further in a later post, meanwhile below is a slideshow, a brief clip from Stephen Colbert’s entrance, and Jon Stewart’s main speech. Full-screen versions of the below photos can be found here.