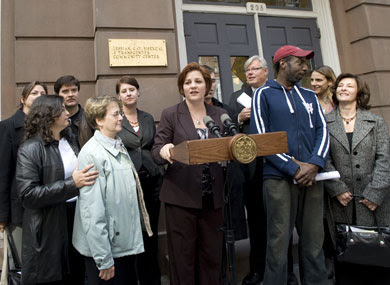 Quote Of The Day – Christine Quinn “He is the candidate on that stage, who I think is in part responsible for everything that is happening, juxtaposed to the attorney general, who has been very strong in both condemning these attacks and condemning the comments of Mr. Paladino. You can’t say for 100%, but you have to look at the context of things. In New York, across the country, the LGBT community has become one of the political targets of the day. When there is focused political rhetoric against the LGBT community, anti-LGBT hate crimes go up. It is a fact, documented by decades of data at AVP [the Anti-Violence Project] and the FBI and in the police department. So why would it be any different this time?” – Openly gay NYC Council Speaker Christine Quinn, blaming Carl Paladino (in part) for NYC’s recent rash of anti-gay hate crimes.

(Via – Julie Bolcer @ The Advocate)