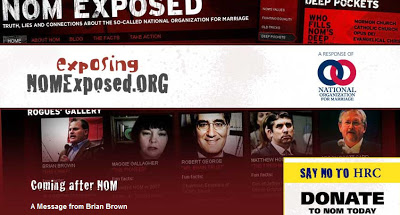 NOM Fires Back At HRC Sometimes you just have to have a good belly laugh. Don’t get me wrong—the work we are doing is serious and important. But when the largest same-sex marriage group in the nation, with its annual budget of $40 million, decides to launch a new website to “expose” NOM and the work we are doing together, I have to wonder what they were thinking. Seriously. Go visit the site for yourself: NOMExposed.org.

When I first went to the site, I half-expected Vincent Price’s voice to start streaming from the site at any moment because it looked like a fan-site for the “Thriller” video. It is seriously the most over-the-top, ghoulishly designed, hilariously campy website I have ever seen. Ever. While the site itself is a joke, the reasons behind it are not: Intimidation, bullying & religious bigotry. But we will not be silenced. Will you stand with us to protect marriage and religious liberty?