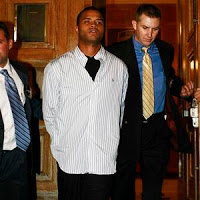 The NYPD have arrested the ninth and final suspect in last week’s brutal gay-bashing in the Bronx.

Ruddy Vargas-Perez had been sought since shortly after he and eight other gang members allegedly attacked a 30-year-old man and two teenage boys on Oct. 3-4 in the Morris Heights section of The Bronx. Vargas-Perez, 22, was the target of a citywide dragnet after he failed to surrender on Friday. Police Commissioner Ray Kelly said yesterday he again promised to turn himself in today. But Vargas-Perez was picked up yesterday afternoon at a Richman Plaza address and charged with assault, robbery and burglary as hate crimes and aggravated sex abuse and unlawful imprisonment. Cops went to his Bronx hideout after receiving a tip.

On Sunday the eight other suspects were arraigned on charges of hate crimes, sexual abuse, robbery and other crimes.