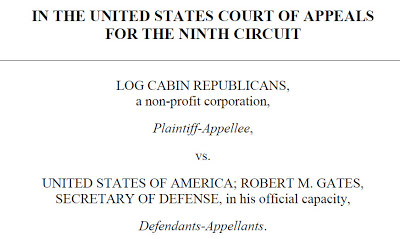 Read the entire brief here (PDF). Lambda Legal has filed an amicus brief in support of the LCR. And so has Servicemembers United:

“Servicemembers United used the opportunity to submit a ‘Friend of the Court’ brief to advance the argument that our members, our organization, and the American public would be irreparably harmed if the stay is kept in place,” said Alexander Nicholson, Executive Director of Servicemembers United. “Specifically, we argue that many of our members will permanently ‘age out’ of eligibility to enlist, re-enlist, or commission if the stay is not lifted quickly, among other issues.”

Speaking on the Michelangelo Signorile Show, yesterday Rep. Barney Frank called on the Obama administration to drop their appeal.

He said President Obama “hasn’t handled this well,” and that he’s “been disappointed,” referring to the “Don’t ask, don’t tell” debacle. He said he urged the president at a campaign stop in Massachusetts last week not to appeal Judge Virginia Phillips’ ruling and injunction ending DADT, arguing that this is a different case than most laws which the administration must defend. Frank believes the president should drop the appeal, especially if Obama does not get a vote in the Senate in the lame duck session of Congress.

Previous Enjoy The Other Side
Next Next Stop: Calamari