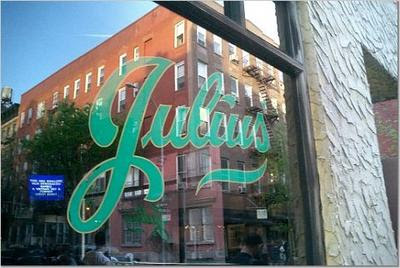 For the second time this month, there’s been a hate crime at a West Village gay bar. Paul Schindler reports at Gay City News:

According to the office of Manhattan District Attorney Cyrus Vance, Jr., Frederick Giunta has been arraigned on charges of assault in the third degree as a hate crime and attempted robbery in the third degree in two incidents at Julius’ Bar, New York City’s oldest gay establishment, late in the afternoon on October 11. Giunta is alleged to have grabbed the wallet of one Julius’ patron and punched the man in the face with a closed fist. The suspect is also accused of punching a second patron, while yelling at the man, “What are you going to do, you fucking nigger? You are a fucking faggot.” Giunta was arrested on October 15 and arraigned the following day.

The NYC Anti-Violence Project notes that the 45 year-old suspect has “a known history of luring gay men with the intent to rob and injure them.” There have been been four anti-gay hate crimes in NYC so far this October and the month is barely half over.

Previous The Sisters – It Gets Better
Next MISSISSIPPI: Sheriff’s Department Sued By ACLU Over Officer Fired For Being Gay