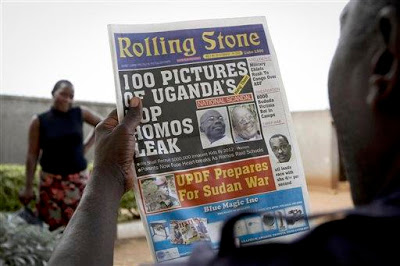 CBS News today picked up on the story of a Uganda newspaper publishing the names and photos of the country’s so-called “top 100 homos.” The yellow banner under the headline reads “Hang Them!”

In the days since it was published, at least four gay Ugandans on the list have been attacked and many others are in hiding, according to rights activist Julian Onziema. One person named in the story had stones thrown at his house by neighbors. A lawmaker in this conservative African country introduced a bill a year ago that would have imposed the death penalty for some homosexual acts and life in prison for others. An international uproar ensued, and the bill was quietly shelved. But gays in Uganda say they have faced a year of harassment and attacks since the bill’s introduction. The legislation was drawn up following a visit by leaders of U.S. conservative Christian ministries that promote therapy they say allows gays to become heterosexual. “Before the introduction of the bill in parliament most people did not mind about our activities. But since then, we are harassed by many people who hate homosexuality,” said Patrick Ndede, 27. “The publicity the bill got made many people come to know about us and they started mistreating us.”

Box Turtle Bulletin, the leading U.S.-based blog for LGBT issues in Uganda, has been all over this story since it first broke on October 4th. BTB’s Jim Burroway reports that many of the published photos were harvested from Gaydar and Facebook profiles. Last week BTB noted that Rolling Stone (unrelated to the U.S. music title) had been shut down by the government for reasons that may or may not be related to the “top 100 homos” issue.

Previous Condom Users Will NOT Be Raptured!
Next Secretary Hillary Clinton – It Gets Better