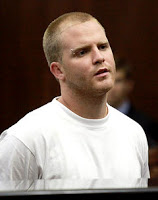 Gay bashing incidents were reported in two Manhattan gayborhoods over the weekend, including one that actually took place inside the historic Stonewall Inn.

Two Staten Island men were accused of pummeling Benjamin Carver, 34, early Sunday at the West Village bar known as the birthplace of the gay-rights movement. The battered Carver of Washington D.C., fought back and later identified Matthew Francis, 21 [pictured], and Christopher Orlando, 17, as the thugs who attacked him in Christopher St. tavern’s restroom. “New York, I still love you,” Carver wrote on his Facebook page as he was having his wounds stitched up at a hospital. At Francis’ arraignment in Manhattan Criminal Court Monday, a prosecutor said the suspect started the confrontation while standing next to the victim at the urinals and asking, “What kind of bar is this?” The victim responded, “This is a gay bar.” “Get away from me f—-t! I don’t like gay people. Don’t pee next to me,” Francis yelled. As Orlando blocked the door, Francis asked Carver for a dollar and then for $20, said Assistant District Attorney Kiran Singh. When Carver refused to fork over the money, Francis and Orlando tackled him and Francis punched him “multiple times” in the face, Singh said.

The second incident took place in Chelsea and actually involved a couple of people with whom I am slightly acquainted.

One man, Andrew Jackson, 20, was charged with multiple counts of assault as a hate crime. In the Chelsea case, a group of men were hugging and kissing one another farewell at 25th Street and Ninth Avenue when Mr. Jackson, with five others, yelled a slur and told them to go home, according to a criminal court complaint. Mr. Jackson and the men he was with, who are still at large, punched the victims, and Mr. Jackson threw a metal garbage can that struck two victims, according to the complaint.

I’m told there’s a lot more to the Chelsea incident and I’ll update that story when more details are made public.